The Prime Talks, hosted by FEUP as part of its FEUP Prime programme, are a moment of sharing experience on topics relevant to companies and which aim to disseminate a culture of innovation and knowledge produced by FEUP Partner companies in collaboration with the Faculty.

In the first session, Prof. Koby Rubinstein, Executive Vice President for Research at Technion, Israel, and Eng. Carlos Moreira da Silva, former Chairman of BA Glass, will talk to us about how to successfully manage jointly generated projects and the expectations of companies versus the academic interest. 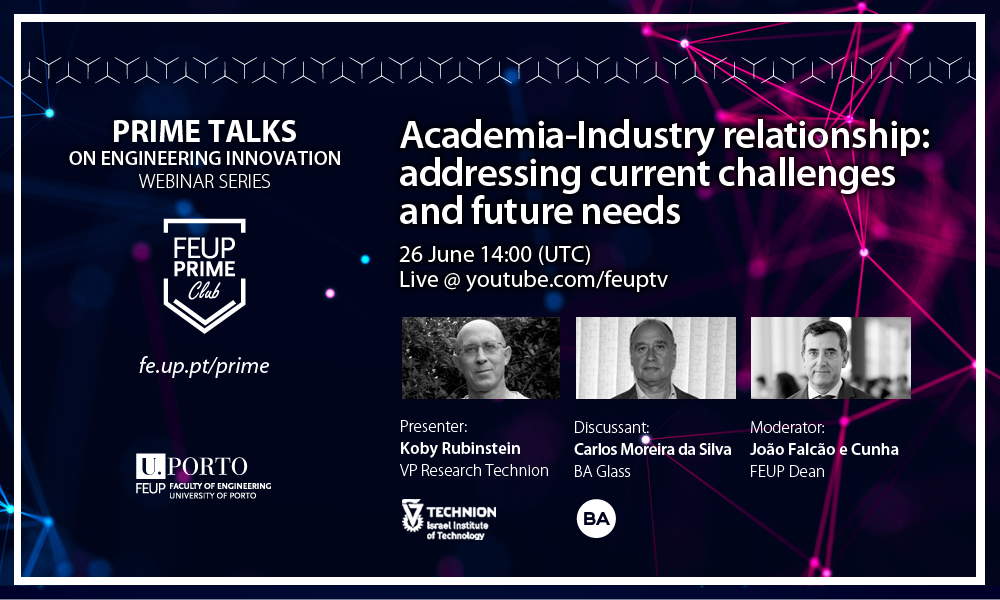 He is the Executive Vice President for Research at the Technion since 2019. He is also a professor of mathematics there and serves as the CEO of the Technion R&D Foundation.

He holds B.Sc. (Tel Aviv University), M.Sc. (Technion) and PhD (New York University) degrees, all in mathematics. He joined the Technion in 1988 from Stanford University. He has also been associated with Indiana University.

Prof. Rubinstein is an applied mathematician. He researches spanned several disciplines, including partial differential equations, asymptotic analysis, hydrodynamics, superconductivity, optics, medicine and more. He holds 9 international patents and was a co-founder of the startup Inray that developed software for the optometry market. The company was sold in 2012 to Shamir Optical.

Koby served as the chairman of the Technion Department of Mathematics (2009-2012) and as the president of the Israel Mathematical Union (2017-2018). He received a number of awards including the Landau Prize in Exact Science, the New England and the Seiden awards for scientific excellence, the H. Rich award for innovation, the S. Kaplan award for creative management and the Member for Life award from the Technion Students Association. In 2009 he was elected Fellow of the AAAS.

Started his professional career in 1973 as Lecturer and later Associate Professor at the University of Porto.

In 1987 got his first management post as executive director of EDP – Electricidade de Portugal; he joined the board of Sonae, the largest industrial Portuguese group, in 1988, where he has been in charge of several start-ups and the industrial business of the group, which he led the turnaround in 2003-2005. Between August 2010 and January 2014 was Chairman of La Seda de Barcelona. From 2006 to 2017 he served as an independent non-executive director in Banco BPI.

In 1998 was appointed Chairman and CEO of BA Glass, where he led a management buy–out in 2004. In 2020 he stepped down from the Board and he is now focused on the business development of TEAK Capital, his family company.

He is currently a member of the Board of Directors of several listed and private companies.