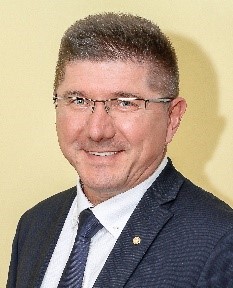 Norwegian University of Science and Technology of  Trondheim, Norway

Filippo Berto is international chair in fracture mechanics, fatigue, and structural integrity at the Norwegian University of Science and Technology of  Trondheim, Norway, since beginning of 2016. He was professor of machine design at the University of Padua, Italy, between 2006 and 2015. He is chairman of the technical committee ESIS TC15 on Structural Integrity of additive manufactured components of European Structural Integrity Society. Filippo Berto received several awards and distinctions, such as Award of Merit (2018) and Wohler medal (2020) from the European Structural Integrity Society. He has received the Stephen Timoshenko Fellow (2018) given by University of Stanford (USA). Filippo Berto is part of the Top Italian Scientists Engineering (Italy). He is editor-in-chief or Editor of several scientific journals, such as, Fatigue & Fracture of Engineering Materials & Structures, Material Design & Processing Communications  and Materials. In addition, he belongs to the editorial board of several leading scientific journals in the area of fatigue, fracture and structural integrity, such as, Materials & Design, International Journal of Fatigue, Safety Science, Theoretical and Applied Fracture Mechanics, Materials Science and Engineering: A, Advanced Engineering Materials, Polymer Testing, Strength of Materials, among others. Filippo Berto is also voting member of ASTM F42 on Additive Manufacturing Technologies  and ASTM E08 on Metal Fatigue and Fracture. As technical Chair of TC15 is also the founder of the series of European conferences on additive manufacturing ESIAM. In 2020 he has been one of the founders of TC18 of ESIS dedicated to the structural integrity of welded structures. Filippo Berto has a major role in the Italian Group of Fracture being the president since 2021 and co-editor in chief of the associated journal.

Faculty of Engineering of the University of Porto, Portugal

Abílio M.P. de Jesus is an Associate Professor at Materials and Manufacturing Processes Group from the Mechanical Engineering Department, Faculty of Engineering of the University of Porto.  He obtained a 5-years Mechanical Engineering Degree (1996) and 2-years MSc Degree (1999) in Mechanical Engineering, major in Structural Mechanics, by the University of Porto and the PhD Degree in Mechanical Engineering by the University of Trás-os-Montes e Alto Douro (Vila Real, Portugal) in 2004. He is a researcher at the Institute of Science and Innovation in Mechanical and Industrial Engineering (INEGI) in its unit on Advanced Manufacturing and is integrated member of the Associated Laboratory for Energy, Transports and Aeronautics (LAETA), being (co)responsible for the LAETA Thematic Line on Advanced Production. With 25 years’ academic career, he has been mostly focused on topics of Fatigue and Fracture of Materials and their relation with Structural Integrity. Manufacturing processes (additive, subtractive) and their relation with fatigue, fracture and structural integrity has been deserving major interest. The research has resulted into 275 co-authored documents in SCOPUS, an H-index of 37 and more than 4500 citations and more than 300 papers in international conferences. He is co-editor of the Structural Integrity Book series and member of the ESIS TC12 serving as scientific secretary. He has been involved in several research project such as European projects on fatigue, FASTCOLD and SHIFT2RAIL2, and several national projects on fatigue and manufacturing such as FIBREBRIDGE, MAMTOOL, ADD.STRENGTH, FERROVIA4.0, GCYCLEFAT.

Strength of Materials and Fracture Mechanics

Liviu MARȘAVINA is Prof. of Strength of Materials and Fracture Mechanics at University Politehnica Timisoara. His main research interests are in mechanics of materials and fracture mechanics applied to composite materials, cellular materials (including auxetic ones), plastics and ceramics. He has a relevant experience in numerical modelling of cracked bodies and experimental stress analysis. He also has experience in ultidisciplinary research in the fields of mechanical, civil and aerospace engineering. He has a strong international network (i.e., Loughborough University, UK, University of Sheffield, UK, Gent University, BELGIUM and Lublin University of Technology, POLAND). In recent years, his main research focus was the characterisation of cellular and composite materials, performing extensive mechanical testing under static, impact and fatigue loading, micromechanical analysis and numerical simulation of mechanical response for such materials. The main results were published in high impact journals like Polymer esting, Theoretical and Applied Fracture Mechanics, Engineering Fracture Mechanics, Computational Materials Science, Fatigue and Fracture of Engineering Materials and Structures. He is PhD supervisor from 2007 and coordinated 10 PhD students and more than 40 Master thesis. Prof. L. Marsavina has published more than 100 papers in international journals and about 80 papers in the proceedings of international conferences. According to Scopus database, he has 2900 citations to date and an H-index of 33. Prof. Marsavina is the chairman of ESIS Technical Committee 13 and from 2018 Vice President of ESIS; He is also Vice President of Romanian Association of Fracture Mechanics (ARMR). He is the corresponding member of Romanian Academy from 2018. Prof. Marsavina is Honorary Member of Italian Group of Fracture (IGF) from 2020, is ESIS Fellow from 2020 and he received the Paolo Lazzarin IGF Medal in 2021.

Sreten Mastilović received his B.Sc. and M.Sc. degrees from the Faculty of Mechanical Engineering of the University of Belgrade in 1989 and 1994 and his Ph.D. from Arizona State University in 1997. He was a Visiting Professor at the Department of Mechanical and Aerospace Engineering of Arizona State University (1997-1998). He worked as an engineer/Scientist at Framatome Cogema Fuels (1998–2001) and Bechtel SAIC Company (2001–2004) on the Yucca Mountain project (research, development and construction of a geological nuclear waste repository). Dr. Mastilović returned to Serbia in 2004 and worked as a Research Associate and Lecturer at the Center for Multidisciplinary Studies (University of Belgrade). He was an Associate (2007–2012) and Full (2012–2018) Professor at the Union University in Belgrade. Dr. Mastilović has been working full time at the Institute for Multidisciplinary Research (University of Belgrade) since 2018. He was the author or co-author of 80+ scientific publications including two books: 1. Investigation of Dynamic Behavior of Brittle Solids by Discrete Systems (2008); 2. Computational Mechanics of Discontinua: Fundamentals and Application in Fragmentation (in Serbian) (2019) and two chapters in Handbook of Damage Mechanics: Nano to Macro Scale for Materials and Structures (2015). He has done research in the fields of viscoelasticity, plasticity, damage and fracture mechanics, impact mechanics and dynamic behavior of materials. Dr. Mastilović was a member of the scientific committees for the organization of the first and second international conferences on Damage Mechanics; he performed review work in numerous international journals. He is a member of the Serbian Society of Mechanics and the International Research Center on Mathematics and Mechanics of Complex Systems (M&MOCS).

Fracture and fatigue process in materials and structures

Prof. Dr. Sc. Nenad Gubeljak is dealing with fracture and fatigue process in materials and structures, since his master and Ph. D. study in year 1998 on fatigue behaviour of wledments. He has received price »Henry Granjon« by International insitute of welding (IIW) in category Integrity of welded constructions in year 1999. For the project Mis-matching effect of constraint he got post-doctorial scolarship Marie Curie Sklodowska by European Comission, and was a guest scientist on GKSS research centre Geestacht in Germany in years 2000-2001. As a member of consortium from Slovenia n the period from 2003 to 2012 he led EU projects in the framework FP6, FP7 (Fitnet, Hiperc) as well as CemLib in Eureka projects MOSTIS in OLMOST. In year 2011 he was named guest professor at Institute of mechanics, Universite de Lille, France. In last 10 years he led bilateral project with foreign science institutions and universities in Argentina, USA, France, Austria, Czech Republic, Russia and Serbia. Mostly in cooperation with foreign scientists he published 160 scientific research articles in international journals as well as contributions on international conferences. Together with prof. Yury Matvinko from Russian academy of sciences, Institute of mechanics, he was rewarded the patent for determination of the yield strength of the pipes. As a member of consortium from Slovenia he leads KOMET 2 project of Austrian academy of sciences. He is a member and a representative of Slovenia in European association for the integrity of constructions ESIS.  He is a member of American association for standardisation of material testing, ASTM section E0.8 for fractures and fatigue. At Faculty for mechanical engineering in Maribor he is an Associate Dean for cooperation with industry, responsible for developing connections between research-development capacities of the Faculty with actual needs of the national economy.

Dražan Kozak is a Professor at the Mechanical Engineering Faculty, University of Slavonski Brod, Croatia. He is also Rector’s Assistant for quality assurance at the same University. He was a Vice-Rector for education and students at the Josip Juraj Strossmayer University of Osijek, Croatia (2017-2020), Dean of the Mechanical Engineering Faculty in Slavonski Brod (2009-2013), and Vice-Dean for science (2005-2009) at the same institution. He received his MSc degree in mechanical engineering (1995) and PhD degree (2001) in construction design from the Faculty of Mechanical Engineering and Naval Architecture, University of Zagreb. He teaches courses in mechanics, strength of materials, numerical methods, finite element method, structural optimization, fracture mechanics, experimental mechanics, etc. at the University of Slavonski Brod, Croatia.His research interests include structural integrity assessment of pressure vessels and pipelines, structural health monitoring, endurance of 3D printed implants made from Ti alloys for biomechanical application, mechanical properties of originally designed porous lattice structures, etc. As the main researcher he led 5 bilateral international projects, 8 CEEPUS projects, several EU projects, and many national projects granted by Croatian Science Foundation. He published 113 articles in impacted Journals referred in the Web of Science databases, which are 720 times cited. His Web of Science ResearcherID is AG-5800-2019. His h-index is 14 according to WoSCC, and 16 according to the Scopus database. He is an honorary professor at the GAMF Kecskemet college, Hungary and guest professor at the Faculty of technical sciences, University of Novi Sad, Serbia. He also teaches at the University of Maribor, Slovenia, and University North, Varaždin, Croatia. Prof. Kozak is the member of the Editorial Board of 14 Journals. He was the President of TEAM International Society. He was supervisor of 8 defended dissertations and member of the Board for assessment and defense of the doctoral dissertations for 24 candidates in Croatia and abroad. He is author of 7 university books. He is the representative of Croatia in ESIS.