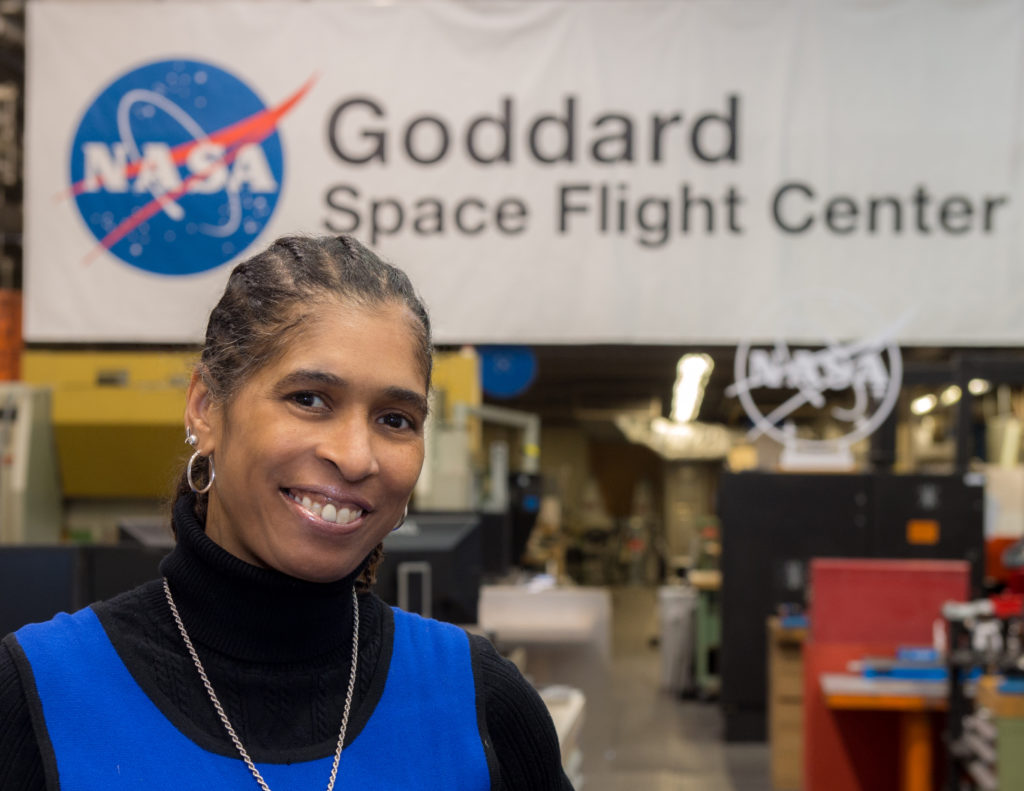 There is enough Space for everyone

There is enough Space for everyone!

Aerospace engineer Aprille Joy Ericsson’s career is distinguished by “firsts,”, she considers her most prestigious the honor of being the first person of color to receive The Washington Award from the Western Society of Engineers. She is the first African-American female to receive a Ph.D. in Mechanical Engineering from Howard University (HU) and the first African-American female civil servant to earn an Engineering Ph.D. at the NASA Goddard Space Flight Center (GSFC. There she currently serves as New Business lead for the Instrument Systems and Technology Division (ISTD). During her 25+ year tenure with NASA, Dr. Ericsson has worked as Aerospace Engineer, Technologist, Project and Program Manager and Executive. She has taught at both Howard University, University of Maryland, and Bowie State University. Dr. Ericsson has been named one of the top 50 minority women working in science and engineering fields by the National Technical Association and she was ranked 8 of 20 on the 2016 list of the Most Powerful Women Engineers by Business Insider.

Ericsson was born in Brooklyn, N.Y. Raised in the projects of Bedford-Stuyvesant, she began her education being bussed to an elementary school in Brooklyn. “It didn’t take me long to realize I had an aptitude for mathematics and science,” she recalls. In her last year of junior high school, she won second place in the science fair and scored high on all her regent and citywide exams. She passed all entrance exams for New York’s technical high schools, but decided, at age 15, to move to Cambridge, Mass., where she lived with her grandparents and attended on scholarship the Cambridge School of Weston. There, she continued to excel academically and was accepted into the Massachusetts Institute of Technology (MIT) Minority introduction To Engineering, Entrepreneurship and Science program. Ericsson coupled her early academics with extracurricular activities, including playing basketball and other sports. “I believe in living a well-rounded life,” she explains. Throughout her life she has competed in basketball, flag football and softball. She played on National ranked softball teams which have won two Coed Worlds, numerous State Championships, and a Women’s military World tournaments. She has been voted women’s MVP for coed flag football. Dr. Ericsson’s dedication to youth has also continued as a basketball, softball, baseball and T-ball Coach. She also enjoys skiing, tennis and cycling for fun.

After graduating high school, she attended the MIT, where she earned a bachelor’s degree in Aeronautical/Astronautical Engineering. During her time there, she was involved in several Aerospace research projects and lead the research for Manned Mars Mission crew systems for interplanetary vehicles for her senior project. “These projects generated my strong desire to participate in manned space missions,” she explains. She applied to NASA’s astronaut program, but a history of asthma placed her on medical review.

In addition to receiving funding from the NASA, while there she also held two internships and COOP positions while finishing her degree. During her first summer at GSFC she won the first student presentation competition, and as a result it is mandatory for all GSFC interns to take her seminar on “Giving Outstanding Technical Presentations”. Because of that experience, she was offered a full-time job there after she received her Ph.D. “That’s how you do it,” she says. “Once you get your foot in the door and meet people, you can show them you’re capable of doing the work.”.

As an attitude control systems specialist her satellite missions have included projects X-Ray Timing Explorer, Tropical Rain Forest Measurement Mission, and the Wilkerson Microwave Anisotropy Probe. For these projects, Ericsson developed and used programs for dynamic modeling simulation, which are invaluable in predetermining the dynamics and structural reactions of spacecraft. Following those assignments, Dr. Ericsson was detailed to NASA HQs as a Program Executive for Earth Science, and a Business Executive for Space Science. She returned to GSFC for a long tenure as an Instrument Project Manager, where she led spaceflight instrument teams and proposal developments for instruments ranging from $15M to $500M. More she served as the Capture Manager for a proposed $250M Astrophysics mid-sized Class Explorer, called STAR-X. Prior to that proposal development, Dr. Ericsson served as the GSFC Program Manager for SBIR/STTR. Formerly, she served as the Deputy to the Chief Technologist for the Engineering and Technology Directorate and Acting Associate Chief Technologist of ISTD.

Ericsson’s work as an aerospace engineer has presented many opportunities to fulfill her dream of advancing space flight. Additionally, she has traveled extensively throughout the world, presenting papers on her research in the US, Canada, Germany, Netherlands, England, South Africa and most recently Mexico. She has also been a Guest Researcher at Radcliffe Institute/Harvard University and she has acquired a Leadership & Management Certificate from John Hopkins University.

She speaks to young people across the country – especially minorities and women – to encourage them to follow in her footsteps. She mentors student every year and 20 years ago she created an email pipeline for groups underrepresented in Science, Technology, Engineering and Mathematics (STEM) disciplines. This pipeline distributes opportunities for employment, grants, internships, and fellowships. “I feel obligated to spur the interest of youth particularly minorities and females in STEM,” she says. “Without diversity in these fields, the United States will not remain technically competitive.” She currently serves as an Advisor to the DMV NSBE Jr. Chapter at Howard University. She is lead Coach for the chapters FIRST Lego League Robotics teams. Dr. Ericsson has served as former Board member, some worth noting are: HU Trustee; International Black Aerospace Council; HU Middle School of Mathematics and Science Chair. Currently, she is a Board member of: MIT’s Industry Advisory Council for Minority Education; the National Academies of Science, Engineering and Medicine Board of Higher Education and Workforce; Advisory Council of Organization Black Aerospace Professionals; and Chair of the Advisory Council of HU Department of Mechanical Engineering.

Dr. Ericsson’s many honors and awards include: an Honorary Doctor of Science from Medgar Evers College; The Tau Beta Pi Alumni of Distinction; The Washington Award; The Women’s Network “Top 18 Women Who Will Change the World”; National Technical Association’s “Top 50 Minority Women in Science and Engineering”; the Women in Science and Engineering Award for Engineering Achievement; the Black Engineers Award Conference Special Recognition Award; and several NASA Goddard Space Flight Center Honor Awards which include an Excellence in Outreach and Technical awards for several Space mission projects.

Dr. Ericsson has always pursued ambitious undertakings and has never shied away from aiming high. In fact, she lives by these words of Norman Vincent Peale: “Shoot for the moon. Even if you miss, you’ll land among the stars.”